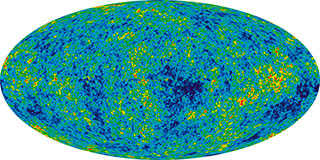 In 1965, a soft hiss was detected by the radio telescopes of two astronomers in the Bell Laboratories... a hiss so faint that previous technologies had been unable to detect it, despite it seemingly coming from every point in the sky. This enigmatic hum was named the cosmic microwave background (CMB), and we now recognise it as very low energy electromagnetic radiation (microwaves) filling every part of the universe, perhaps left over from the Big Bang. While the CMB may be omnipresent, the faint signal we are able to detect makes it very difficult to accurately observe it. Now, thanks to highly sensitive instruments placed on satellites orbiting our planet, we have an extensive map of the cosmic microwave background covering the entire sky. This map shows all its fluctuations and other details. By analysing it, scientists can find patterns that may provide clues about the early universe, and detect unexpected phenomena, that open up new questions!

The cosmic microwave background radiation is the afterglow of the Big Bang, a fossil record of the radiation from the very early universe, an image of the moment only a few hundred thousand years into the life of the universe when everything had cooled enough for atoms to form. When these atoms formed, there were far fewer unattached charged particles around for light to interact with, allowing it to propagate freely, and the universe ceased being opaque to light. By using very sensitive detectors, scientists are able to measure variations in the faint level of this fossil microwave radiation across the entire sky. In the universe before this point, for normal matter, the electromagnetic force would have played a far more important role than gravity because it is so much stronger, but should have cancelled out across the whole universe. However, measurements show small but significant local variations which are understood to be the source of the structure in the universe today. Without these small areas of material varying in density compared to it's surroundings, we would be unable to explain how the material in the universe had grouped together to form large structures like galaxies or galaxy clusters and the massive, near empty voids in between them. But the question is... how did these variations form?

The entropy of the universe is dominated by the cosmic microwave background – an anisotropic landscape of energy fluctuations, suggesting an early universe in thermal equilibrium, balanced at a maximum entropy before local variations led to clustering and the formation of planets and galaxies. But why? Surely it’s entropically unfavourable for the energy not to have spread out evenly? Scientists think that gravity might explain the observed fluctuations. Gravity works differently to thermal energy because very spread out things have a very low rather than high gravitational entropy. When matter sticks together, it releases gravitational potential energy to its surroundings, allowing more disorder. So the gravitational entropy of the universe has increased, although thermal entropy has decreased. This must mean that gravitational entropy dominated the early universe, that or there are other entropic factors.

However, the more they look into it, the more gravitational anomalies astronomers find, including: – Extra fast stars, which move faster than they should according to observed distributions of normal matter. – The flyby anomaly, where spacecraft receive greater than predicted acceleration during gravity assist manouevres. – The observed increasing rate of expansion of space. – Planetary orbits widening faster than expected if their sole cause is the sun losing mass by radiating energy. – Photons from the cosmic radiation background gaining more energy than expected when travelling through space, suggesting gravity falls off faster than usual at certain distance scales. – Extra massive hydrogen clouds – where hydrogen clumps together more than expected. – The weakness of gravity. There's more about these in our article on gravity.
Learn more about /gravity.

The European Space Agency’s Planck satellite has added even more detail to our image of the CMB, revealing an unusual haze surrounding the centre of our galaxy. At first glance, this blurry bubble appeared to be very similar to the type of energy (known as synchrotron emission) astronomers usually associate with supernova events. The difference is, this cloud detected by Planck is brighter at different frequencies, and so supernovae cannot be to blame.

Other guesses include galactic winds or even elusive dark matter particles interacting with each other. Once the source of this mysterious fog is solved, astronomers can focus on looking at the CMB without the galactic haze interfering with results.

Fluctuations in the CMB density give us a snap-shot of an early universe made up of individual hydrogen atoms whizzing around, too fast and hot to combine with each other. But we don't know for sure: we've so far found no signals from after the CMB formed. Any light emitted was snapped up by the hydrogen smog! Telescopes simply cannot ‘see’ through the mist and so this era is known as The Dark Ages.

Theories suggest that over time the hydrogen slowed down and collected to form nebulae from which the very first stars formed. Thermal energy from these stars may have caused atoms to lose electrons, or pick up extra ones – ionising the universe. This is known as the Epoch of Re-ionisation, during which light from every part of the spectrum reappeared. Astronomers are still looking for light from the first stars formed and signals from hydrogen atoms during The Dark Ages, which could unveil invaluable information about how our universe came to be the way it is now.

Dark matter is a strange kind of matter: it has mass, but doesn't interact electromagnetically... i.e. with light. This means we can't see it with telescopes or by probing with radio or x-ray signals. The gravitational effect of this mass could be responsible for the higher speeds of stars within galaxies, and of the galaxies within clusters. If this dark matter is completely unaffected by electromagnetic forces, it may have been able to form structure in the universe before atoms formed, which could explain variations observed in the cosmic microwave background. Its mass could also explain the observed expansion of the universe as well as the observed relative abundance of elements created in the period shortly after the Big Bang. Perhaps the most compelling evidence for the existence of dark matter however, is the gravitational lensing observed in the Bullet Cluster: this seems to show directly that mass is concentrated in an area other than ordinary matter, and cannot easily be explained in any other way (such as modifications to our understanding of the way gravity works).

Polarisation of the CMB

Imagine light travelling as a wave along a string. It can vibrate in any direction: up and down, side to side, forwards and backwards... This is known as unpolarised, and this is how light starts out. Polarised light only vibrates in one direction, and when we detect it, we learn something about the material it's travelled through. Astronomers have now noticed swirls and arches tracing out intricate patterns in the polarisation of the CMB. Some theories say that the fingerprint-esque pattern could be a result of Einstein’s gravitational waves – ripples transporting gravitational energy throughout spacetime. If this is true, it could evidence Inflation Theory – the theory that the universe expanded at an explosive speed in an infinitesimally small amount of time shortly after the Big Bang. However, measurements of the polarisation were taken by a ground based telescope known as BICEP2[1], while assuming that the galactic haze and other foreground radiation such as large clouds of carbon monoxide in our galaxy is negligible – a fairly big assumption when we don't yet know what the causes of these are. Furthermore, the polarisation may not have been caused by gravitational waves at all, and may simply be a result of the radiation interacting with space dust[2].
Learn more about Cosmic Microwave Background Polarization.

Our model of the early history of the universe suggests that it cooled as it expanded following the Big Bang. This cooling process may have triggered changes in the way in which the universe behaved, just like a liquid freezing into a solid (these changes are known as phase transitions). These phase transitions probably didn't happen simultaneously throughout the universe, and should have left behind cosmic textures. However, so far we haven't found these textures in the cosmic microwave background – scientists suggest they may just be too faint, and we need more sensitive instruments to detect them.

One alternative theory to Inflation Theory suggests that light rays in early universe travelled faster than the speed of light today. They propose that this happens at extreme temperatures, and estimate the spectral index of the universe to be 0.96478. Our current measurement is 0.968, and as estimates improve, whether the practical number moves towards or away from 0.96478 should tell us whether this theory is likely.

Black holes may also hold clues as to the formation of the early universe... but did they form as the first stars did, or did the first stars form the first black holes? There are currently a number of NASA affiliated missions seeking out answers to questions surrounding the evolution of the universe: – SOFIA (2014) – Hubble(1990) – Spitzer(2003) – Herschel (2009-2013) – JWST (2018)

From gravitational waves to dark matter to theories of the early universe, it seems the impact of the cosmic microwave background (CMB) is as wide as the background is. A fingerprint of our history, it provides us with so much information, and we are still untangling it – and looking for more, because there is also some information missing!

This article was written by the Things We Don’t Know editorial team, with contributions from DLR, Jon Cheyne, Cait Percy, Grace Mason-Jarrett, and Rowena Fletcher-Wood.

The Cosmic Dawn: Epic Turning Point in History of the Universe (Holiday Feature)
26th December, 2022
Scientists are closer than ever to detecting the ultra-faint signature of an epic turning point in cosmic history when the first stars and galaxies formed.
Learn more

Is Dark Energy Evolving?
31st October, 2022
Observational cosmologists are actively searching for a “new physics” that may solve the enduring enigma of our rapidly expanding Universe. Quasars, the ancient cores of galaxies where a supermassive black hole is actively pulling in matter from its surroundings at very intense rates, may hold the clue to solving the mystery. Luminous quasars –like […] The post Is Dark…
Learn more

Is Dark Energy Evolving? –Ancient Quasars May Offer the Answer
25th September, 2021
Observational cosmologists are actively searching for a “new physics” that may solve the enduring enigma of our rapidly expanding Universe. Quasars are the ancient cores of galaxies where a supermassive black hole is actively pulling in matter from its surroundings at very intense rates may old the clue to solving the mystery. Luminous quasars […] The post Is Dark Energy Evo…
Learn more