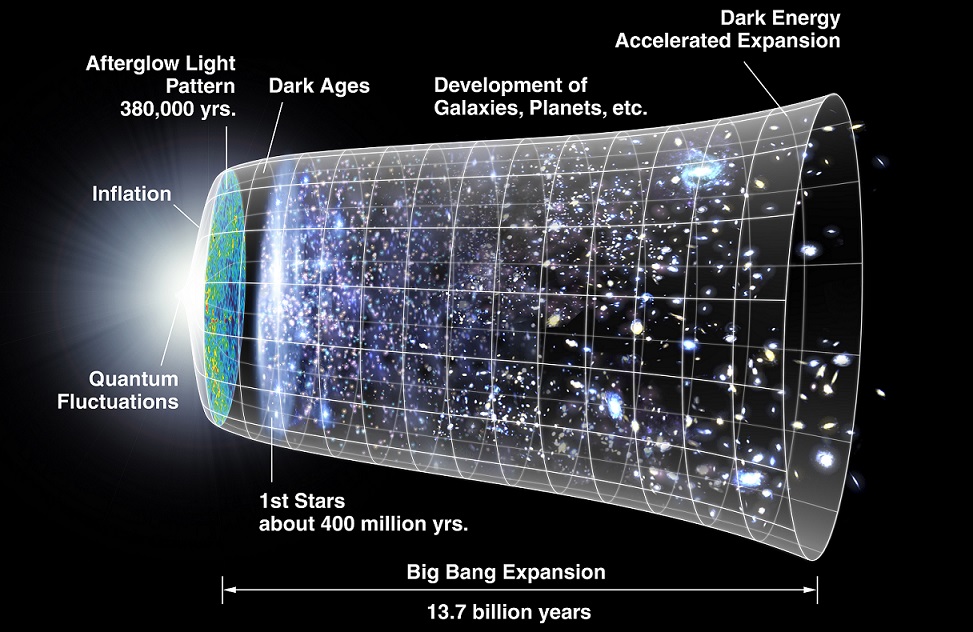 When we look to the night sky, we see darkness scattered with faint lights. Space is vast and sparsely populated with stars, dust clouds, asteroids and comets seen through telescopes. We can see planets orbiting other stars and stars orbiting each other, and we've found galaxies which could be as old as 13 billion years accelerating away from us[1]. Today’s universe is buzzing with activity... but what happened just after time began?

The Big Bang theory proposes that the universe began as a single point containing every piece of matter, so small it is actually dimensionless, and expanded. It's not an explosion as such, but rather the sudden appearance of the universe from a single point[2]. In an impossibly small amount of time, space in the universe grew exponentially and protons and electrons gradually came together to form a type of hydrogen call deuterium. Atoms then smashed into each other and broke up into a thick smog, stopping light. This era is known as the The Dark Ages, a time where for 380,000 years astronomers simply see through the fog, and have very little evidence for what might have gone on then.

Eventually, the atoms cooled and recombined – the Epoch of reionisation – and, suddenly, light travelled again. This light – the Cosmic Microwave Background – is the best piece of evidence we have currently for uncovering the sequence of events which led up to us.

Before the beginning of time

What existed before the Big Bang? If we are to assume that the universe did indeed begin as this theory suggests, then we have a huge problem. In everyday life things happen as a result of cause and effect, a glass breaks on the floor because it fell off a table because someone knocked it because… and so on. Following this logic, something must have caused the Big Bang, therefore something must have existed before the Big Bang. How could we possibly ever see evidence of this? Or, if nothing did cause it – then why did it happen?

In the 20th Century Einstein came up with the theory that massive objects bend space-time. You can think of this like sheet stretched flat in the air – this is space-time. By putting a heavy ball on to this sheet (a massive star or black hole), the sheet will dip and stretch, creating a well at the position of the ball. In a similar way, this is how very heavy stars and other huge objects bend the fabric of time and space and we can see evidence of this in gravitational lensing effects. At points like this, time travels slower. Therefore, if we combine Einstein’s thinking with the Big Bang theory then all the mass of the universe is contained in a single point and time simply stands still.

So, there are no dimensions in the pre-Big Bang universe and no time for any history to be made. Without these constituents, scientists are left with very, very little to work with. That hasn’t stopped them from making educated guesses though. A branch of quantum theory known as loop Quantum gravity has made astonishing advances in addressing these sorts of questions.

Some of these theories sound like something out of Star Trek, involving 11 dimensions, strings, quantum jumping, worm holes, parallel universes, parent universes – the list goes on. If there was anything before the Big Bang, then evidence might be found in the cosmic microwave background.
Learn more about Before the Big Bang.

One theory which is rapidly gaining credibility (due to developments in Loop Quantum Gravity – a branch of quantum mechanics that links it with general relativity) looks at the issue of a singularity. What exactly is a singularity? In mathematical terms, a singularity describes a point where a certain property (e.g. mass, temperature, density) is infinite. Black holes are singularities with infinite density. However, this definition causes maths to blow up and contradict physical laws. New theories suggest that singularities are actually gateways to other universes, leading to the idea that rather than there being a Big Bang, our universe began as a result of a Big Bounce from a parent universe[3].

The Big Bounce theory has been around for a long time, but hasn't gone anywhere, mostly because we don't know how the deflated universe would transition from contraction back to expansion[4]. On the other hand, we haven't found any evidence to disprove it either (what would that even look like?). Some scientists have suggested that a very tiny contracted universe is governed by quantum mechanics (rather like nanomaterials) rather than bulk physical laws, and that's why it so far eludes us.

What about what happened just after the Big Bang (or Big Bounce)? The vast majority of the atoms we can detect in the universe were created very shortly after the Big Bang, in a process known as nucleosynthesis. Most of the early atoms were hydrogen and helium, which formed in a specific ratio, along with tiny amounts of deuterium, lithium, and beryllium (heavier elements were created later inside stars). For these elements to form in the ratio that they did, the medium in which they formed must have had a particular density; however, scientists have found that this density would have been too low to allow the universe to expand at the rate it did. So there must be another force at play here – what?

2By looking very carefully at the process of nucleosynthesis, scientists have predicted exactly how much of each element should have been created in those first few moments. Hydrogen and helium ratios comply with these predictions, but lithium does not. In fact, three quarters of the lithium that we predict is missing. Is it eing destroyed (maybe in stars)? If so, where? How? Or is there a mistake in the prediction calculations? Interestingly, if scientists calculate the involvement of a theoretical dark matter particle, the axion, during the early processes in the universe, then there doesn't need to be so much lithium created[5] – this may or may not be enough to explain it all.

The cosmic microwave background radiation is the afterglow of the big bang, a fossil record of the radiation from the very early universe, an image of the moment only a few hundred thousand years into the life of the universe when everything had cooled enough for atoms to form. By using very sensitive detectors, scientists are able to measure variations in the faint level of this fossil microwave radiation across the entire sky.In the universe before this point, for normal matter, the electromagnetic force would have played a far more important role than gravity because it is so much stronger. However, matter was mostly composed of a very hot plasma of particles, and this force would have cancelled out over distance. Our measurements of this background radiation show small but significant local variations which are understood to be the source of the structure in the universe today. Without these small areas of material varying in density compared to it's surroundings, we would be unable to explain how the material in the universe grouped together to form large structures like galaxies or galaxy clusters and the massive, near empty voids in between them. The question we are faced with is: how did these variations form?

4 Our model of the early history of the universe suggests that it cooled as it expanded following the Big Bang. This cooling process may have triggered changes in the way in which the universe behaved, just like a liquid freezing into a solid (these changes are known as phase transitions). These phase transitions probably didn't happen simultaneously throughout the universe, and should have left behind cosmic textures. However, so far we haven't found these textures in the cosmic microwave background – scientists suggest they may just be too faint, and we need more sensitive instruments to detect them.
Learn more about /cosmic microwave background.

So, are we missing something crucial about the beginning of our universe, or do our models just need refining and a bit more information? Physicists are working at finding out!

This article was written by the Things We Don’t Know editorial team, with contributions from Jon Cheyne, Cait Percy, Johanna Blee, and Alice Wayne.

Asteroids Crashing Into Dead Stars are Helping Explain Where the Universe’s Missing Lithium Went
28th December, 2020
What happened to all the lithium? The question has stumped astronomers for decades. While cosmologists have successfully predicted the abundance of the other light elements from the Big Bang, lithium has always come up short. Now, a team of astronomers may have found the reason: lithium-rich asteroids are smashing into white dwarves. As amazing as … Continue reading "Asteroids Crashing Into…
Read more