physics Geophysics structure of the Earth 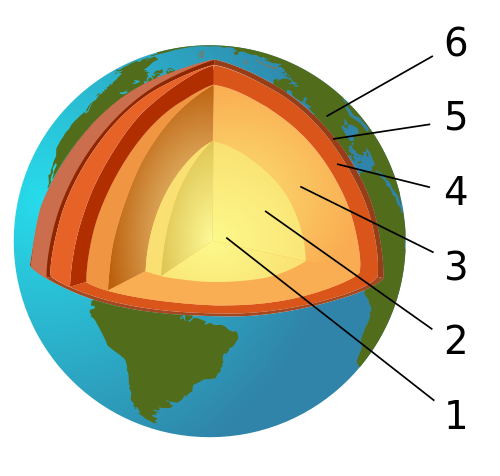 Structure of the Earth

We still don't know a lot about what's right underneath our feet, let alone what’s lurking miles down – and there are 6,300 km of rock and iron beneath us. The idea of distinct layers and a fairly simple system of convection are now long in the past – the Earth’s crust, mantle and core have many unanswered questions about their layers and how they interact. A greater number of improved seismometers may help us slowly piece together what’s really going on.

Firstly, there's the problem of continental crusts, which form the land we live on. Continents exist on parts of the crust that are thicker than oceanic crust. We don't know how or when these continents formed, and plate tectonics cannot currently explain it. As well as not knowing how much continental crust there used to be, there's also no answer to how much there may be in the future. Plate tectonics is about movement, and through it the continued destruction and creation of the Earth's crust. The continued recycling of the Earth's crusts means that the evidence for what lies in the past is being destroyed, making it difficult to prove how and why continents were formed.

Heat is carried from the Earth's hot core through the mantle via convection currents. There's some evidence that this convection may occur in layers, and some contradicting evidence that shows its currents act over the whole mantle. Observations of volcanoes show us their are at least two distinct chemical reservoirs within the mantle. This, coupled with the fact that earthquakes in subduction zones always stop at the same specific point in the mantle, provides the main evidence that convection may operate across several layers. Images, on the other hand, provide strong evidence for a whole layer. Either way, the correct theory must account for all the differences.

At the centre of our planet, heating this mantle, is the Earth's core. It is known that the core has a solid inner core and a liquid outer core, but a lot of other information is unknown. Seismic data has shown that the core shows sideways motion, with one side melting while the other crystallises. Scientists haven't been able to explain why this may be, although it may be due to a large impact such as an asteroid. Seismic data also shows that there may be variations in the structures of iron within the core. The extreme conditions here make it difficult to recreate experimentally, so studying core behaviour and the structure of its material remains speculative.Nevertheless, establishing the structure of the core remains important: its dynamics are key to many other processes here on Earth. For example, Earth's internal heat is radiated out from the core through the mantle, and convection in the outer core is responsible for the Earth's magnetic field.

Rotation of the Earth's core results in its magnetic field, but some of the mechanisms taking place are not entirely clear. It has, however, been shown that this magnetic field protects the Earth from cosmic rays and, without it, life would be impossible. Records show that on numerous occasions in the past, the poles of this magnetic field have switched – North became South, and South became North. We expect this will happen again, but when the next switching event will occur is a matter of debate. Some believe it may even already be underway, but most scientists are unsure. There is also a dispute over what the effects of a switching event would be. Problems could occur during the switch such as depleted magnetic protection against the Sun, for example.

The magnetic field of the young Earth a mystery for scientists. Analysis of ancient rocks has shown that billions of years ago the Earth had a powerful magnetic field[1], and simulations[2] of the Earth’s core suggest that the thermal conductivity of iron, under the intense conditions found at the centre of the Earth, was low enough to allow this strong magnetic field. But experiments carried out to simulate the conditions do not agree[3].

We're not even sure where all the material that we now think of as the Earth came from. The vast majority of the Earth's surface – 70% – is covered with water. But how did it get there? A large quantity turned up during the early formation of the planet – but probably not all of it. Where exactly all the water comes from and how the amount of water on the Earth has varied in the past is still not clear. Comets and other such objects are also thought to have formed in the early, colder solar system. This means it's possible that a lot of water came from the bombardment of the planet in its youth by asteroids and comets.
Learn more about Origin of Earth's water.

It's not just the water we're unsure of, either – the atmosphere also raises questions. Why is there nitrogen in our atmosphere, and how did it get here? In June 2014, a NASA and ESA study found that nitrogen on Saturn's moon Titan may have appeared as a result of the moon forming in the cold gas and dust disc which formed the Sun[4]. Titan – the second largest moon in our solar system – is often compared to the Earth, but considered to have frozen in an earlier stage of development. Like water, comets may have been responsible for the arrival of much of the nitrogen we have today... and there's a lot of it! 78% of our atmosphere is nitrogen.

Another common school of thought is that when the Earth was very young, it had an atmosphere composed of mainly hydrogen and helium, but these light elements simply floated away from our planet and were replaced by a thicker, heavier atmosphere of carbon dioxide, ammonia (a nitrogen compound) and water vapour made by volcanic activity. However, the question of how ammonia arose inside volcanoes (in the inner regions of the Earth), we don't know.

We may not know how the Earth's oceans or atmosphere came to be here, but at least we have a fairly good idea about the Earth itself. Or do we? While Venus, Earth and Mars all have similar proportions of volatile elements (material which become gas at comparably low temperatures, like water), exactly where these materials originated remains a big question in planetary science, with comets once again a prime suspect.
Learn more about Original of volatile elements in the terrestrial planets.

How long is our coastline? It seems like a very simple question, yet it's actually a problem! Different methods often result in very different lengths that depend on the detail with which the coastline is measured. Imagine you have the task of measuring the coastline for a small island. You could look at a map, or a satellite image, draw a circle around it and take the length of that circle. But what if there's a small bay, or a peninsula sticking out? You can change your line... but as you zoom in and look closer, you will find more and more small changes that need to be made, and all them will increase the size of your answer. This fractal structure of coastlines is at the root of the problem. In fact, it seems like a problem we may never be able to answer. Some ‘official’ figures for coastlines can even vary by up to a factor of four. These large discrepancies can be a real problem, with everyone unsure which figure they should adopt, and whether measurements they wish to compare were made using the same technique. In order to avoid a wide range of estimates for coastlines scientists need to devise a way in which the method for finding these lengths can be standardised.

Are earthquakes more likely during a full moon? How about a supermoon? Given the moon exerts a very visible and significant effect on the water that covers so much of the Earth's surface, it's logical to question whether how significant the moon's gravity is on the molten rock beneath. Such questions are amplified when large disasters occur that are coincident with such times.Two key questions are posed in this area: is the frequency of earthquakes (of any size) affected? Is the scale of the earthquakes affected?* *We don't know, but scientists are working on it.

From magnetic fields to the history of the Earth, it seems that to really understand structure we have to travel far into space and far back in time. But can all our questions be answered even then? It's hard to tell – but geoscientists will keep on chipping away.

Recent structure of the Earth News

The Rapid Changes We’re Seeing With the Earth’s Magnetic Field Don’t Mean the Poles are About to Flip. This is Normal
13th June, 2022
Current changes in the Earth&#039;s magnetic field strength don&#039;t mean there&#039;s an imminent geomagnetic reversal.
Read more

Scientists in Japan Have Found a Detailed Record of the Earth’s Last Magnetic Reversal, 773,000 Years Ago
27th October, 2020
The Earth is overdue for a paleomagnetic reversal. The last one was about 750,000 years ago, but they usually switch every couple hundred thousand years.
Read more

The magnetic mystery at the center of the Earth
8th September, 2015
New experiments tackle the paradox surrounding the planet’s core.
Read more