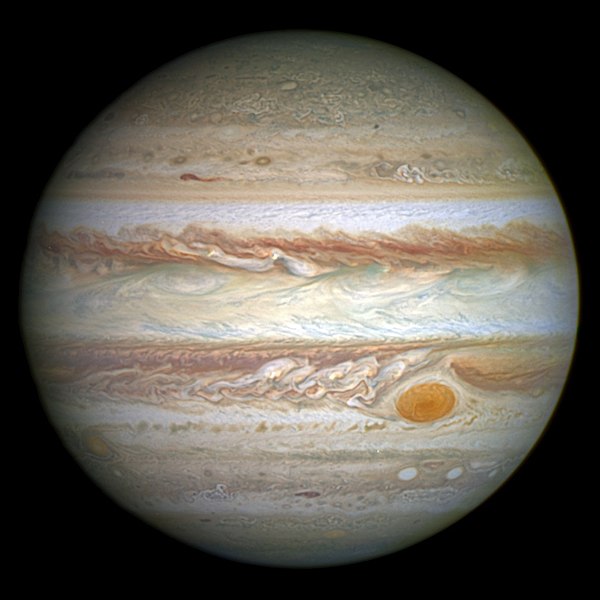 Itâs sometimes hard to imagine that within our own Solar System are worlds so different to Earth, with rings spanning thousands of kilometres, and storms which rage for thousands of years. Jupiter, named after the Roman king of Gods, is the most striking in colour. With its terracotta hues and milky bands, not to mention the Great Red spot, Jupiterâs atmosphere portrays complex and intricate weather patterns which fester deep inside the thickest atmosphere in the Solar System. In 2011, NASA sent a spacecraft to Jupiter - Juno - which is predicted to arrive at the planet in 2016. The mission is to orbit Jupiter in order to collect valuable data about its composition, fields and magnetosphere.

Jupiter is famous for its Great Red spot, something which many of us know to be a gargantuan storm. In fact Jupiter is riddled with storms, with wind speeds on the planet reaching up to 384 mph - more than twice the highest speed recorded in the devastating hurricane Katrina (175 mph). The Great Red Spot is the largest storm of all, so large that three Earth-sized planets could be accommodated inside the oval-shaped tempest. Astronomers have been making observations of the Great Red Spot for more than 350 years, but still are unable to detangle the mysteries surrounding it. The second largest storm observed on Jupiter is one known as Oval BA, which formed in 2000 when three smaller storms merged to form one. As wide as the entire planet Earth, Oval BA is a seriously powerful weather system.

Both of these anti-cyclonic storms reside in the southern hemisphere of Jupiter, and both appear to us as a dusty brick-red colour. Astronomers have been puzzling over what could be the reason for the bright pigment of the Great Red Spot and itâs younger brother since their discovery. Observations of Oval BA have seen the storm acquire the hue as it ages, while the Great Red Spot has been red for as long as we have been able to see it. Based on this, some suspect that perhaps with maturity comes reddening for these systems. They think this could happen because as the hurricanes build up power they rise above the thick cloud layers - the Great Red Spot is believed to rest 8 kilometres above its surrounding clouds - which perhaps could allow for interaction with sunlight making it appear red. The exact way it could do this is as yet unknown, what we do know is that the colour and environmental conditions are definitely linked[1].

Even more baffling, scientists have observed the Great Red Spot to be shrinking in diameter[2]. Data collected between 1996 and 2000 showed that the storm lost 15% of its diameter over the four years â thatâs 1km per day! Going back and studying the records from 1880 confirm that the spot is indeed shrinking, indicating that it may have lost 50% of its size since records began. Yet careful calculations make clear that it is not slowing down. If it continues to shrink at the rate it is, the oval shape of the Great Red Spot is expected to become a very circular storm by 2040. What the implications of this could be are not clear, nor are we sure of what exactly is causing the tempest to shrink. If the gales are not slowing down then some other mechanism must be at the root of this.

Storms arenât the only things astronomers struggle to explain on Jupiter. The accidental discovery in early 2014 that the moons of Jupiter donât go completely dark while being eclipsed by the great planet from the Sun could tell us more about the upper layers of Jupiterâs atmosphere. Originally astronomers were trying to better measure the darkness of space, and intended to use the Galilean moons as a reference point when they were shadowed from the Sun, however they found the rocky satellites to be lit up very faintly. One possible explanation is that the upper layers of Jupiterâs atmosphere are providing a dim glow, though the cause of this is a mystery. Some astronomers have guessed that perhaps the tiny particles from which the great clouds of Jupiter form are to blame. âHazesâ or âaerosolsâ, as they are known, could be scattering sunlight from the bright side of the planet round to the moons. This effect is observed to happen on our own planet, it is what causes the moon to appear red during total eclipse events. If this theory can be confirmed then we will gain a valuable insight into the workings of Jupiterâs colourful weather systems.

Since Galileo first observed four objects orbiting Jupiter in 1610, over 60 other bodies have been spotted in orbit around the largest planet in our solar system, and new ones (small ones only a few kilometres across), are still being discovered. But how many moons does the gas giant have? Because the most recent Jovian moons to be discovered are so small and the system is so distant, they had escaped detection until now. For this reason, it is highly likely that there are even more bodies of this size, or smaller, orbiting the planet. So how many moons does Jupiter actually have?

Juno can help us find out more

The atmosphere of Jupiter is thought to be the thickest in our Solar system. Based on current models, astronomers believe that water is present in the lowest layers of the thick clouds. No-one knows for sure though, since the hostile atmosphere prevents us from being able to take samples or even see much further in than the top layers. During it's time orbiting the gas giant, Juno hopes to collect more data about the lowest layers of this complex atmosphere - some of which will reveal to us exactly how much water is present. This data is invaluable to scientists, as it will determine which formation theory for Jupiter is correct, or indicate that a new theory is needed. Understanding how Jupiter formed will be key in understanding how the Solar system formed.

Not only will it collect data about water, but also Juno intends to track the meteorological behaviour deep within Jupiter's atmosphere. The light and dark bands we can see on Jupiter have been observed for many years, and we think we know some things about how they came about. This is all theory though, and based on the much tamer weather systems on our own planet. Scientists currently don't know what exactly makes these banded clouds form: collecting data about temperature variations and mapping global atmosphere variations can hope to unveil the mystery.

At huge pressures, such as the ones present deep in Jupiter's atmosphere, hydrogen can be compressed so much that it take a form called metallic hydrogen. This liquid form of the element carries properties of metals, such as being able to conduct electricity - with which comes magnetism. Many think that the presence of so much metallic hydrogen near the center of Jupiter is what makes it magnetic field so incredibly strong, giving rise to the fantastic display of Aurora. Jupiter has the brightest Aurora events in the Solar system, learning more about them can give us insight into understanding other highly magnetic celestial bodies - like young stars.

Everything in the universe radiates energy. The hotter something is, the more energy it radiates - and as it radiates energy, it cools down. Eventually the object, be it a star or an atom, should read a stable temperature as the total energy going in balances the total energy coming out. This is known as thermal equilibrium. Jupiter, together with Saturn and Neptune, seem to violate this law. In the case of Jupiter, the giant planet radiates away 57% more energy than it receives from the Sun. This implies there must be another source of energy heating the planet, but it's not clear yet what it might be[3].
Learn more about Energy imbalance of the giant planets.

This article was written by the Things We Don’t Know editorial team, with contributions from Ed Trollope, Jon Cheyne, Cait Percy, and Grace Mason-Jarrett.