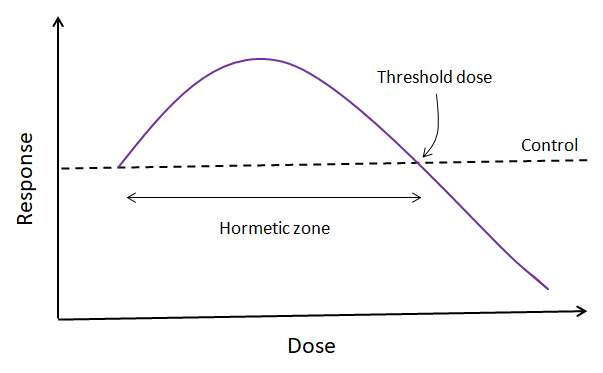 In 1943, a new word was introduced to the world of medicine: hormesis. Chester M. Southam and J. Ehrlich first used it in the journal Phytopathology. The word was derived from Greek, and its literal meaning is rapid motion. But the origin of its meaning dates back to Paracelsus. “All things,” he wrote, “are poison and nothing is without poison, only the dose permits something not to be poisonous.” You’ve heard the phrase, “too much of a good thing”, right? Well, it turns out this phrase has a baby brother: “too little of a bad thing” – and this describes the hormetic effect.

Hormesis is a dose response phenomenon. To understand hormesis, we have to first understand two key concepts in medicine: inhibition and stimulation. We use inhibition to describe the action of a drug or environmental agent that stops another process from working: it kills it; in the case of signalling, it suppresses it. Not everything that inhibits is bad: for example, anti-inflammatories inhibit a natural inflammatory response. Equally, the opposite of inhibition – stimulation – is not always good: you are overstimulated when you’re stressed, for example. But when natural processes are completely inhibited (i.e. they don’t work at all), that eventually becomes very very bad because it means the body isn’t working, and that can lead to a toxic response. We use stimulation to describe the action of a drug or environmental agent that makes a process work faster. At low levels, this “stress” can teach your functions how to work under greater pressure and extend their capacity, whilst at higher levels it can be detrimental. Hormesis describes the balance between inhibition and stimulation. We often think that a drug does nothing to us until the point where it has an effect – the threshold dose. This describes a linear dose-response relationship… but it doesn’t describe the behaviour of every drug. Some substances follow a biphasic dose response: at some point they switch over from stimulating to inhibiting (like the inverted J-shaped curve below, A) or from inhibiting to stimulating (like the J-shaped curved below, B). This is hormesis. In toxicology, however, hormesis has got a bit mixed up with the idea of what’s harmful and what’s beneficial. This is because there’s often a positive biological response to low level stressors. Often, the term is used to describe low dose benefits and high dose toxicity. But this doesn’t quite work – as we’ve just discussed, inhibition is usually worse and stimulation usually better, but it can be the other way around. Then there are microbes. Sublethal concentrations of some toxins can make microbes healthier[1]. For example, low levels of antibiotics can stimulate the growth of harmful bacteria – good for them, but bad for you. For this reason, scientists are keen to decouple the meaning of hormesis from the ideas of good and bad.

How common is hormesis?

How common is hormesis? We don’t know. The biochemical mechanisms behind hormesis are not well understood, so it’s hard to predict where it will crop up. However, one study of the literature[2] suggested that 1% of published articles including a dose-response relationship could demonstrate hormesis. Historically, hormesis has not been accepted, and the dose response model typically employed is linear, impacting testing practices and regulations. Regulations are expensive, and scientists are now concerned that the linear model, which suggests no amount of a substance is ever acceptable, could be harmful when it comes to some environmental agents such as carcinogens and radiation.

At the threshold dose, something starts to be toxic: that is, it inhibits normal processing. The literature normally treats the threshold dose as fixed and attempts to identify it. However, this could be unhelpful, because there is not only evidence that the threshold dose varies between individuals, it might actually change for an individual. This is known as a dynamic threshold. To explain why this might happen, we have to look at what we do understand about how hormesis works: and that is through evolution. Hormesis is considered an adaptive response to moderate (and often intermittent) stressors. This means that we developed it over time because we needed to. As we evolved from cells, we were exposed to harsh environmental conditions including toxins, radiation and free radicals – things that can easily destroy developing cells. The cells that survived these conditions were the ones that found ways to harness these agents and incorporate them into key processes such as signalling and metabolism. For example, carbon monoxide, a toxic gas essential for neuron signalling, or the poisonous metal selenium, critical for many enzymes. At high levels, these substances are still toxic, but at low levels they are essential for health. This is why some scientists think that threshold doses could be dynamic. After all, we have evolved in the past to incorporate more toxins into essential processes. Wouldn't exposure to more now do the same?

Is there a single, unified hormetic mechanism – or is it different for different environmental agents? Researchers aren’t sure, but it’s a fascinating question when the effect is observed across the world of microbes, animals and even plants and, within humans, across entirely different physiological systems. But they’re trying to find out. Crucially, understanding these mechanisms could help us prevent and treat diseases, including ageing[3]. What we know so far is that the size of the hormetic response doesn’t depend on its mechanism (or it’s cause). Instead, the response size is caused by us – the species responding. Scientists even claim that the size of the response is a direct measurement of the plasticity of biology – how far biology can adapt in one step.

One Nature article[4] made an even more interesting observation about hormesis: it seems to depend on phenotype – your observable genetic characteristics. Often, dose response depends on weight, but this study has demonstrated that other characteristics can affect hormesis. The authors hypothesise that hormetic adaptations could be passed on through epigenetics.

The magnitude or bigness of hormetic stimulation is often overstated in the literature, just as hormesis is underreported, at least according to statistical analysis[5]. Looking carefully at the numbers, the analysts reported that, because only very high hormetic responses are acknowledged, these set the bar higher than a normal hormetic response – and so lots of more typical responses fall below the radar.

There are many example of hormetic systems, of which the best known may be alcohol. Small amounts of alcohol may be hormetic, preventing heart disease and stroke, and lengthening life span. This has been studied and quantified in worms.

List of Institutes Researching Why is alcohol hormetic?
Things We Don’t Know (1 researchers)

The effect has also been seen for ischema. If the heart or brain experiences an inadequate blood supply, it becomes resistant to a more dangerous cut off which might otherwise have led to heart disease or stroke[6][7].

A hormetic mechanism could also explain why engaging in intellectual challenges keeps your brain working[8].

It could even make us live longer. Biogerontologists have shown that exposing cells to mild stress provokes an adaptive response hormetic response, producing anti-ageing effects. These stress responses include exercise, dietary phytochemicals, heat shock, and dietary restriction. More research is needed to understand how these work, but scientists reckon it may be something to do with the mitochondria, our cellular power plants. In generating energy to feed our cells, mitochondria also generate reactive oxygen species (ROS), free radicals that can damage cells. Some ageing theories surround getting rid of these, whilst others think they may extend our lifespans by stressing out our cells a bit. This second theory, mitohormesis, could explain why exercise and dietary restriction are so good for us – they put our cells under stress.

Although too much ultraviolet (UV) light and gamma radiation from the sun can be cancerous and burn our skin, moderate exposure makes us generate natural vitamin D and is protective against cancer[9].

This may also be true for other kinds of ionising background radiation. Radiation – whether alpha or beta particles or electromagnetic waves – is so ubiquitous as our normal background that mammals have adapted to live with it – but can they live without it?[10] It’s possible that we rely on low levels of background radiation to stimulate our immune systems and other biological functions. This is supported by studies performed in animals and observations of people exposed to higher levels of radiation[11]. Researchers are unravelling how and why this happens, and whether effects differ between different sources of ionising radiation. However, critically, it’s impossible to disentwine radiation and its effects from chemical exposure, despite efforts with thick lead walls.

Although still underreported, hormesis is known to be a biological response to toxins, drugs, radiation, exercise, and dietary restriction, et cetera… Scientists are still looking into why.

This article was written by the Things We Don’t Know editorial team, with contributions from Ginny Smith, Rowena Fletcher-Wood, and Holly Godwin.

The impact of exposure to air pollution on cognitive performance
5th September, 2018
Verbal and mathematical skills testing on 25,000 Chinese people may link pollution levels to cognitive decline and even neurodegenerative diseases. Beijing, Yale and Peking universities showed an increasing effect with age, more pronounced in less educated males (the group most likely to work outdoors). The pollutant and mode of action are unknown, but theories suggest white matter - which coordinates signals across the brain - may be affected.
Read more