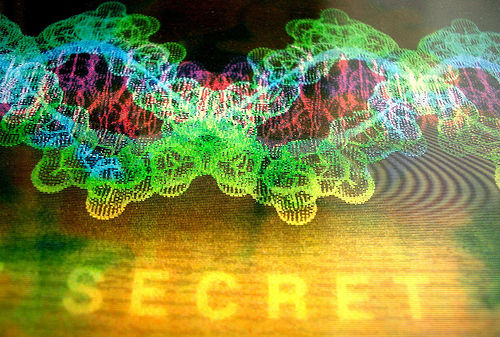 Our DNA provides instructions to make every part of our body.. but we still don't know exactly how it works.

Things we don't understand about our genome

Our genes are what make us who we are- they provide the instructions to allow our bodies to build all the proteins we need. But humans contain only about 19,000 of these genes, which is surprising when you consider that a water flea contains about 30,000. So why do we have so few genes? In fact, we don't even have one for each of the basic proteins we require. This isn't as big a problem as it sounds though- the process by which genes produce proteins isn't a simple 1 to 1 relationship. One gene can be rearranged to provide information about more than one protein, for example. The complexity of the process, however, means it is still not fully understood.

The fact that we can hold enough data in so few genes is, in itself, incredible. It is thought that interactions between DNA, RNA, proteins and chemicals all affect when and where a gene will be turned on or 'expressed' This allows huge complexity to emerge from a relatively small number of genes. How exactly this works, however, is poorly understood. Recent advancements have suggested that something known as 'alternative splicing' may be involved. This is a system by which different parts of the gene are activated at different times, and it is the combination, rather than the specific region, that code for proteins. But even this doesn't give us the full picture of how you can build something as complicated as a human being from such limited instructions.

In fact, we don't even understand how and why genes are switched on and off. Different cells require different proteins, so as a cell specialises necessary genes are switched on and unnecessary ones are turned off, but how exactly this happens is a mystery. New research is looking at how different environmental and lifestyle factors can alter the behaviour of our genes, without actually changing them. Improved knowledge about gene switching could one day allow us to control genes; this could eventually help reduce symptoms of aging and could even have applications in the treatment of diseases such as cancer.
Learn more about Gene Regulation.

How do our genes affect us?

When our cells divide, DNA has to be replicated so each of the 'daughter cells' has a copy. During this process, the ends of the strand are often lost, so nature has provided us with a protection mechanism. At the end of each chromosome exists a region known as a telomere, which shortens with each division, but protects the vital regions of the DNA. This reduces the chance of cell death or cancerous mutations occuring during replication. When the telomeres become too short, however, cell devision is no longer possible. It is clear that shortening telomeres goes hand in hand with normal aging, and the illnesses that go along side it, but how this link works is unclear. This means there is a lot of interest in telomere research- from scientists studying cancer to those producing beauty pharmaceuticals.
Learn more about Telomeres.

We know that people react differently to different drugs and lifestyles, and that your genetics are important in these reactions, but isolating the genes responsible is a mammoth task. Some genes that increase your risk of developing certain diseases, e.g. breast cancer, have been discovered, and are beginning to be used to allow people to take preventative measures. In many cases, however, it is a combination of genetics and environmental influences that leads to a particular disease developing. One day, genetic testing may lead to medicine personalised for each individual, and help us to live longer and healthier lives. For the moment however, for most diseases, that day is a long way off.

One of the ways in which we know our DNA can affect us is if it gets damaged. As we get older, the build-up of free radicals in our bodies can cause damage to our proteins, lipids and DNA. Free radicals are produced as a normal part of metabolism, and are highly reactive, as they have an unpaired electron in their outer shell. This means they tend to interact with molecules in the body, and in doing so can cause a cell to die, or to become cancerous. Free radicals aren't all bad though- they are important for cells to signal and communicate with each other. The problem comes if too many are produced, because the bodyâs natural protective mechanisms canât handle the onslaught, meaning damage can occur. This is known as oxidative stress, and more of it builds up as you get older. Taking in extra antioxidants, from foods such as blueberries, is thought to help neutralise free radicals by providing them with the electron they need. However more research is needed before we can say for sure that consuming antioxidants can prevent cancer or extend life.

The future of Genetics

It is already possible to genetically modify plants and animals to make them more useful to us. The most common example of this is in crops genetically modified to be more resilient, or to be resistant to the herbicides and insecticides used to control weeds and pests. However more ambitious genetic modifications have also been attempted. Spider silk shows unique mechanical properties; it has a high tensile strength while being very ductile. The silk of Darwin spiders is the toughest biological material ever recorded- more than ten times tougher then Kevlar. It is therefore unsurprising that the ability to manufacture this silk is of huge interest to material scientists. Unfortunately, the process of silk synthesis is long and complex, making it difficult to replicate. To artificially synthesise the silk, firstly we must produce it and then spin it correctly. One method involves taking the gene that produces the silk protein and putting it into an animal's DNA, so that animal makes the protein for us. Transgenic goats have been created whose milk contains the protein, and silkworms have been genetically altered so they produced spider silk. Although the results from these experiments may be useful, the silk produced was not as good as the Darwin spider silk. It isn't clear whether we ever be able to make the material as successfully as the Darwin spiders can.

Another way in which we might be able to use our understanding of DNA to our benefit is by utilising stem cells. Pluripotent stem cells have the potential to specialise into any specific cell, so in theory we could find a way to grow them into any body part we wanted. This would mean the end of organ donation and waiting lists for transplants. Although there have been some successes in the lab, there are still major problems in the growth of complicated organs from stem cells. At the moment, we just don't know whether one day we will be able to grow any body parts we need to replace in the lab.

This article was written by the Things We Don’t Know editorial team, with contributions from Cait Percy, and Johanna Blee.