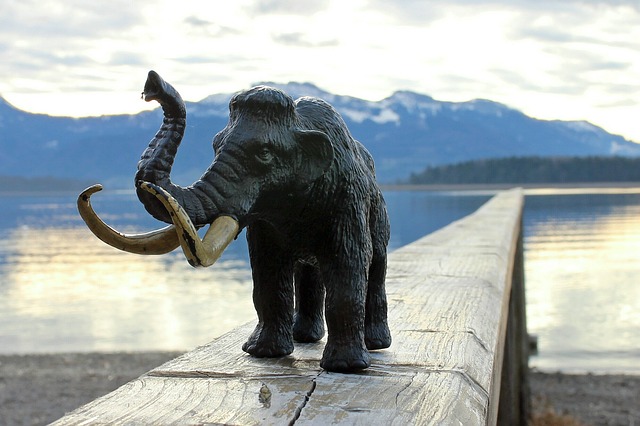 Extinctions are important events in the history of the earth. By studying fossils, scientists are trying to answer questions about how past species died out, with the long-term hope of preventing us from coming to a similar fate. Understanding the causes of extinction can also help conservation efforts to preserve the incredible diversity of species currently on the planet as far as possible.

We can't even begin to estimate that diversity because when it comes to some species – bugs and plants in particular – there are so many undiscovered species. Every time we dive below 1000 metres (the maximum depth that sublight penetrates) we discover a new species. In fact, scientists think we are now losing species of bugs and plants to extinction (often anthropogenically caused) faster than we can discover them. This is particularly worrying when you remember that plants contain a host of interesting chemicals. For all we know, the solution to many diseases could be out there for the picking – probably in the ocean or rainforests.

One species we don't see a lot of is fungi. Many fungi exist beneath the ground and can extend for miles unseen. They are highly diverse and scientists estimate there may be five million fungal species are alive today, but we've only identified 100,000 species. Due to habitat loss, are losing as many as 6 for every 1 plant lost to extinction, but we have no real idea how many we're losing. It's important to know how many fungi there are and how fast we're losing them in order to conserve them.

There are some cases where it is clear why a certain animal became extinct. Dodos, for example, were hunted to extinction by humans because of their large size, tasty meat, and inability to fly, and their habitats were disturbed by dodo-egg-eating rats we brought with us on ships. In other cases, however, it is less clear why an animal didn't survive.

Woolly mammoths lived on an Arctic island until as recently 1700 BC, but it isn't clear what killed off this last group of survivors. It could have been human hunting, although there is little evidence of it left behind. A virus might have led to their demise, or it could have been a change in the habitat, or a large weather event. Alternatively, it could be that the island habitat just couldn’t support them, so as the ice bridge to the mainland melted they became stranded and could no longer survive.

Lemmings are a particularly anomalous species when it comes to survival. Whilst the lemming mass suicide story is a myth perpetuated by the 1958 Disney documentary ‘White Wildnerness’, in which lemming mass suicide was staged in a non-natural environment using cinematic effects and imported lemmings, they do experience weird population cycles. Every four years their populations peak, after which large numbers of lemmings migrate, and many of them die in unfamiliar environments. As a consequence, population numbers drop so low that they risk extinction. Why a more steady population doesn’t establish itself is unclear, although some biologists think predators (in particular, stoats) may have something to do with it.

List of Institutes Researching Lemming population booms
Things We Don’t Know (1 researchers)
We also don't know what wiped out the Neanderthals – a species of human that developed in Europe and Asia while the ancestors of modern humans were evolving in Africa. We know they encountered modern humans, as remains dating from similar periods in the same location. However, no Neanderthal remains have been found more recently than 30,000 years ago.

So what happened to this robust and successful species? Some people argue that modern human's increased intelligence meant they could out-compete the Neanderthals. Others argue that they were absorbed into our species as Neanderthals and modern humans met and interbred. People in Europe, Asia and New Guinea have 2.5% Neanderthal DNA, supporting this theory, although it isn't clear that this amount of breeding would be enough to wipe out the species entirely. Climate could have played an important role, as it was very unstable at the time they died out. What is certain, is that more research is needed to find out exactly what happened to the Neanderthals.

It may be scary to think about, but the likelihood is that one day, humans will no longer exist here on earth. What it is that leads to our downfall, however, is not clear. While there is a chance that it will be something we have done that causes our demise, there are also natural events that could mark the end.

One thing that could wipe us out would be a meteor strike. Millions of meteors appear in Earth’s atmosphere every day, but only a few over the course of a whole year are large enough to be potentially dangerous. NASA should be able to spot the risk early, giving us a significant warning of the danger. But if we did spot a potentially life-threatening asteroid hurtling towards the earth, is there actually anything we could do to divert it? Many scientists are currently working on methods for deflecting asteroids, but whether they would work in practice (and whether different ideas would cooperate) still remains a mystery.

2 Another natural event which could be disastrous for humans is the eruption of a supervolcano. Volcanoes have erupted with devastating effects to local areas during human history, but if a supervolcano erupted, it could wipe out our entire species. We know that there was a lot of volcanic activity around the time that most dinosaurs went extinct, and it’s thought the volcanoes played a role in that extinction. But could the same happen to us? So far, scientists haven’t been able to find any large magma chambers that would suggest the site of a future supervolcano... but why this is is unclear. Maybe there really aren't any looming eruptions, or maybe we just haven’t found them yet. A more worrying theory is that these chambers develop rapidly and erupt very quickly. For the moment, however, geophysicists continue the search for these potentially disastrous chambers.

We know it's possible to survive a mass extinction: just look at the birds. One of the few species to survive the mass extinction that killed off the dinosaurs 65 million years ago, a theropod, became the birds we know today. Whilst there must be a biological or ecological reason for their survival, however, scientists are stumped. Lack of other "straggler" species suggest it wasn't random chance that led the birds to persist, and this makes their survival especially exciting and intrguing. It could even help humans.

By understanding how and why species go extinct, we can better conserve those animals and plants currently sharing our planet. One area of study is how diversity differs in different regions of the earth. We know that some areas are home to a multitude of different species, while others can only support just a few, but the time and resources required to fully explore these differences mean there is still much work to be done.

Of particular interest is extremophiles. Extremophiles inhabit the most extreme and uninhabitable places on earth – and thrive there. In pockets where extremophiles live, such as glaciers, there are often very few living creatures, but rather unique ones. In recent years, changing climate has led to loss of some of these extreme habitats and extinctions of the extremophiles that live there. Scientists who have been tracking these environments have made a rather worrying discovery: that whilst changes such as warming and melting glaciers makes habitats more accessible and so increases the number of species living there, it drastically reduces diversity. Whilst we don't know what role extremophiles play in our planet's health, the loss of so many species is a concern.

This article was written by the Things We Don’t Know editorial team, with contributions from Ed Trollope, Cait Percy, Johanna Blee, and Rowena Fletcher-Wood.

LICIACube Sends Home Images of the DART Impact and the Damage to Dimorphos
4th October, 2022
The Italian LICIACube CubeSat has returned its first images of the collision between the DART probe and the asteroid Dimorphos
Read more

The long night: how the Ice Age drove blue-eyed shag evolution
27th March, 2022
The first snow had started to settle on the bare ground. Soon the shag will have to make a choice.
Learn more