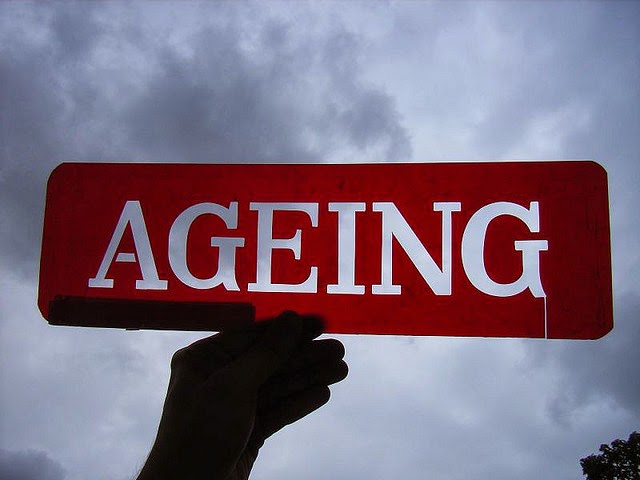 At the moment at least, ageing is an inevitable part of life. And yet scientists don't really understand how, or why, we age. It is thought that a combination of pre-programmed bodily changes and environmental issues are responsible[1], but how these interact isn't clear. Some researchers in this area aim to help us make better lifestyle choices[2] in order to live a long and healthy life, while others look for a way to stop the aging process in its tracks[3].

One question that needs answering before we can fully understand the aging process is whether it is something coded into our genes, or simply a case of our bodies ‘wearing out’. From an evolutionary point of view, once an animal has passed reproductive age, it is of little use, and may not be worth the food needed to keep it alive. There have been some suggestions that human women live so long post-menopause because they were useful in helping to look after their grandchildren[4], allowing mothers to gather more food. However this benefit would not run to humans living as long as we seem to now. So some scientists argue that aging is purely a result of damage accumulating in our bodies - meaning that if we could prevent that damage, we may be able to extend our lifespans indefinitely.

List of Institutes Researching Why do we age?
Things We Don’t Know (2 researchers)

One of the ways in which our bodies are damaged as we get older is down to the build-up of free radicals. Free radicals are produced as a normal part of metabolism, and are highly reactive, as they have an unpaired electron in their outer shell. This means they tend to interact with molecules in the body, and in doing so can cause a cell to die, or become cancerous. Free radicals aren't all bad - they are important for cells to signal and communicate with each other. If too many are produced, however, the body’s natural protective mechanisms can't handle the onslaught, and damage can occur. This is known as oxidative stress, and more of it builds up as you get older. Taking in extra antioxidants, from foods such as blueberries, is thought to help neutralise free radicals by providing them with the electron they need[5]. However more research is needed before we can say for sure that consuming antioxidants can prevent cancer or extend life[6].

While some scientists are trying to discover the common factors that cause all of us to age, others are wondering why it is that some people live to 100, or even more, despite not living particularly healthy lifestyles. It is likely that the difference is down to their DNA[8]. We know that people react differently to different drugs and lifestyles, but isolating the genes responsible is a mammoth task. In many cases, it is a combination of genetics and environmental influences that leads to a particular disease developing[9]. One day, genetic testing may lead to medicine personalised for each individual, and help us to live longer and healthier lives. Already, testing for genes linked with breast cancer allow at-risk individuals to take preventative measures[10], and the dosage of some drugs can be altered depending on a person's genetic make up[11]. For the moment, however, for most diseases the days of personalised medicine is a long way off.

Even if it was possible to find a gene “responsible for” every disease, it’s still not that simple. Although all cells in our body (other than red blood cells) contain a full copy of our DNA, not all of it is used in each cell. The genes which make up our DNA tells cells how to make various proteins, so only the genes that carry instructions for making proteins the cell needs will be activated. How genes are regulated is complex, and isn't well understood. As well as internal factors, like what kind of cell the DNA is in, environmental factors such as diet have an influence. This area of research, known as epigenetics, has had a huge impact on our understanding of genetics. It shows that what's coded in our DNA is not the full story. Our lifestyle, and even that of our parents and grandparents[12], can influence which genes are turned on and so affect our health and how we age.

As the search for the secret to eternal life continues, scientists have begun to turn to other animals for clues. Various different animals have been hailed as holding the secret to eternal youth. One of these is the naked mole rat, which lives in East Africa. Most other rodents of its size have short life-spans (a maximum of 4-5 years for mice and rats) but the naked mole rat can live for over twenty years[13]. Scientists are trying to explain why they can live such a long time, but it may be due to their very low metabolism, and their ability to reduce it further during times of hardship. These periods could give them a chance to deal with oxidative stress more effectively, so their body would accumulate less damage than it otherwise would. They also seem to be hugely resistant to cancer - in fact, a naked mole rat with cancer has never been discovered[14]. Mining the secrets of the animal kingdom may be our best bet in our fight to extend our healthy life-span.

As well as looking for animals that naturally live a long time, researchers have found artificial methods of increasing some animals' lifespans. For example, severe calorie restriction allowed mice to live 50% longer than normal[15]. However these gains come at a price. The long-lived mice suffered from reduced fertility and flies bred to live longer don't reproduce as successfully their short-lived counterparts[16]. When it comes to humans, while extending life may seem like a good aim, it wouldn't be so positive if it came at the cost of health. Trials like this are also very difficult to conduct on humans due to the safety risks involved, and the necessarily time-intensive nature of the trial required!

The social implications of extending human life are also of great concern. As people live longer, and the old outnumber the young, the question of how we pay for the older generations is raised. Retirement ages will need to rise with life expectancy, but that can only be feasible if the mental and physical problems that are associated with old age are defeated, so people can work for longer. Currently, researchers believe that human lifespan does have an upper limit[17], so life expectancy won’t just keep increasing indefinitely. What this age limit might be however, isn’t clear, and probably won’t become so for many years to come.

This article was originally published on the TWDK blog, and was written by our Natural Sciences Editor, Ginny Smith, and one of our summer interns from 2013, Johanna Blee.

This article was written by the Things We Don’t Know editorial team, with contributions from Ed Trollope, Cait Percy, and Johanna Blee.

Does the key to anti-ageing lie in our bones?
4th July, 2020
Osteocalcin, a hormone produced in the bones, could one day provide treatments for age-related issues such as muscle and memory loss
Learn more

How your Brain Experiences Time
5th September, 2018
The Kavli Institute for Systems Neuroscience in Norway identified a signal that fluctuates with time as a neural clock in the human brain, which they believe maintains a subjective sense of time and arranges experiences into a sequence. This neural clock goes hand in hand with our circadian body clock and hippocampal time cells, which manage other aspects of our experience of time. The connection to memory means understanding the neural clock could help treat diseases such as Alzheimer’s.
Read more

Eat hot peppers for a longer life?
24th January, 2017
People who eat hot chilli peppers are less likely to die. Scientists don't know why, but capsaisin seems to have a protective effect against heart disease and stroke.
Read more

Too much sitting, too little exercise may accelerate biological aging
23rd January, 2017
Older people who are less active have shorter telomeres. Staying active is linked to a younger 'biological age'- with a difference of up to 8 years.
Read more