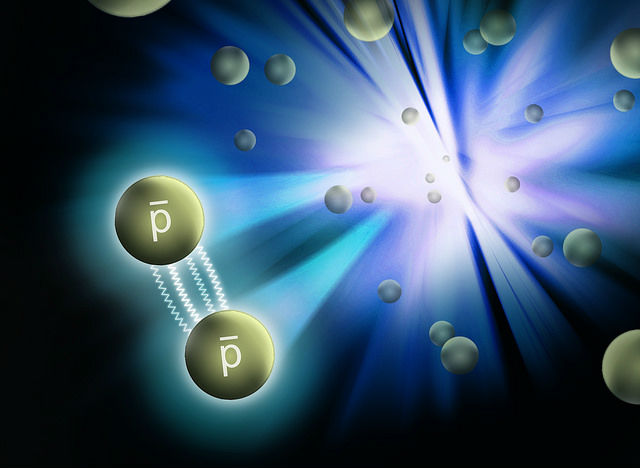 Everything around us is made of matter – some combination of building blocks called particles.

Antimatter is the mirror image of matter, with a corresponding antiparticle for each particle of matter. Any particle has a set of properties, defined in the standard model of physics, such as charge, mass, spin and many other things. With the exception of mass, as it’s really a form of energy on that scale, all of the properties of a particle can be reversed to make its antiparticle.

When particles of matter meet their corresponding antiparticles, they annihilate, releasing pairs of high energy electrons. The famous equation E = mc2 describes the relation between mass and energy. As we know today, even a tiny bit of mass, like that of the electron or positron, can release huge amounts of energy upon annihilation.

"Antimatter" as we now know it first appeared in a 1928 paper by Paul Dirac when his equation to describe motion of particles gave two answers – one positive and one negative. These antiparticles have always been thought to possess almost all of the same basic properties as ordinary matter particles, (other than a few things like charge); however, some properties, including the behaviour under gravity, of antimatter have never been measured directly. This area of study could provide interesting clues to questions about the expansion of the universe.Antielectrons were first seen a few years later by Carl Anderson, who renamed them positrons. Researchers are now producing large quantities of positronium in order to study particle properties. Positronium is a bound state between an electron and a positron (the electron's antimatter equivalent) which decays rapidly in normal circumstances when the components annihilate. The short lifetime of these atoms makes their properties particularly difficult to study.

Where has all the antimatter gone?

Since the discovery that matter and antimatter are created in equal amounts, physicists have asked themselves why is the universe we see only made up of matter? Just after the big bang, while the universe was very hot and dense, lots of particles were so close to their corresponding antiparticles in this very small universe that they collided and annihilated each other. This released energy that could be converted into matter/antimatter pairs again. As the universe expanded, the chance of the particles annihilating decreased, but there should still be equal amounts of matter and antimatter.

So why is the universe around us is made up of matter as far as the astronomer can see?

Everything that we currently know about particle physics is described by the standard model. This model is well established and has been rigorously tested. However, it cannot explain the abundance of matter we see in the universe. This means physicists need to expand this model in new ways to help explain the phenomena.

There are several possibilities that may account for the missing antimatter. It’s possible that by chance, all of the antimatter is somewhere else in the universe and entire areas of space are filled with antimatter, but we would expect to see the energy release coming from annihilation at the boundaries of these places and detect the presence of antinuclei. Space-based missions such as PAMELA are searching for evidence, but these have not found large antimatter regions yet.

One possibility is that more matter than antimatter was produced in the first place, say 51% matter and 49% antimatter, and annihilation occurred until all that was left in the universe was that 2% matter, and a lot of energy. But as far as scientists can tell, the laws of physics are exactly the same for matter and antimatter. If there were galaxies, solar systems, planets and life forms all made of antimatter, an antifootball would bounce off an antiwall through antiair in just the same way as we would expect for normal matter.

The precise mechanism by which this asymmetry appears is unclear; however, it might arise from violation of charge-parity symmetry. This symmetry suggests that the laws of physics are unchanged in a situation where one particle is replaced with its antiparticle (charge symmetry), and left and right are flipped as if by a mirror (parity symmetry). This symmetry is known as CP-symmetry for short, and a violation of this symmetry is known as a CP-violation. While this holds true for most particles, particularly at the low energies we encounter on a daily basis, studies of particles called kaons have shown some asymmetry. Neutral kaons are able to transform into their antiparticles, and vice versa, but experimental data have shown that the process is not equally likely to occur in both directions. More recent experiments have shown that other neutral mesons (particles containing one quark and one antiquark) display similar asymmetry.

This asymmetry goes some way to explaining the prevalence of matter over antimatter in our observed universe. However, quantitative simulations of the period after the big bang that take into account the observed asymmetries show that they cannot account for the size of the imbalance. As a result, scientists are continuing to search for further examples of CP-violation. Further examples of CP-violation in quarks are likely to be hard to detect, because of the colossal energy levels required to study them, and extremely sensitive measurements needed to see a disparity.

There are more particles in the universe with mass than just quarks however, so a natural question for physicists to ask is whether CP-violation can be found in other particles. Known as leptons, the other particles with mass interact via the weak nuclear force, but not the strong nuclear force, so any CP-violation found here would not contradict the strong CP problem. These leptons fall into two groups: charged leptons (which include the electron, muon and tau particles), and their corresponding neutrinos. Searches for CP-violation in these areas tend to focus on decays of the tau particle because it is the heaviest particle and the likelihood of it decaying in a particular way is well theoretically grounded, such that any deviation from this predicted rate would indicate new physics.

Neutrinos are another a promising particle with which to look for CP-violation. These chargeless particles have incredibly small masses and can oscillate between three different types: electrons, muons, and taus. This was first seen in the 2013 Tokai to Kamioka (T2K) experiment in Japan. Experiments designed to test the probability of these changes in type are also investigating whether this probability is the same for neutrinos and antineutrinos. A difference in these probabilities would indicate a CP-violation, but the minuscule masses and tendency of neutrinos not to interact make them difficult to analyse.

In 2016, New Scientist reported evidence of 32 muon neutrinos morphing into the electron flavour, compared to just 4 muon antineutrinos becoming the antielectron variety. ...This could be considered evidence of CP-violation: more matter and less antimatter than expected. Another particle accelerator is planning experiments to confirm the T2K results[1], which will help answer the question of whether neutrino oscillations can explain matter-antimatter asymmetry.

What particles are their own antiparticles?

In 1937, an Italian physicist named Ettore Majorana established that equations that predicted the existence of antimatter particles could, in some circumstances, be solved such that a particle was its own antiparticle. These hypothetical particles are known as Majorana fermions.

Detecting Majorana fermions is not a simple matter. The possibility exists that neutrinos are Majorana particles and, if this is the case, then a particular sub-atomic process (called neutrinoless double beta decay) would be allowed. Scientists are searching for the tell-tale signs of this particular event, but it's predicted rarity means it's difficult to say for certain that it's not occurring if we see nothing.

There are also states in which quasi-particles (phenomena caused by actions within certain excited states of matter) can be observed to behave like Majorana fermions, but these are not fundamental particles.

Protons are some of the most stable particles in existence, but some theories predict that, very rarely, one ought to decay. This is at least another possible way to explain the apparent lack of antimatter in the observable universe. Attempts to observe these decays have thus far not produced any evidence that they occur, but as with the Majorana fermions, this doesn't conclusively show that they don't.

Because these theories predict that on average a single proton ought to take an incredibly long time to decay (about a billion billion times the age of the universe!) to have any chance of spotting a decay, scientists need to watch a huge number of protons at once, and so the detectors which are set up to spot this type of decay are colossal and expensive to build. This equipment also needs to be deep underground, to try and shield it from background radiation which would dominate the observations and make it harder to spot the particular type of event the experiment was looking for.

This article was written by the Things We Don’t Know editorial team, with contributions from Jim Sadler, Jon Cheyne, and Alice Wayne.

Tiny Collapsed Star Unleashed a Gargantuan Beam of Matter and Antimatter Reversing Einstein’s E = mc^2
25th March, 2022
A city-sized collapsed star, pulsar PSR J2030+4415 – the ancient remains of exploded stars so dense its gravity warps nearby space-time – has generated an X-ray filament of matter and antimatter (image above) that stretches for trillions of miles as revealed by NASA’s Chandra X-ray Observatory. This discovery could help explain the presence […] The post Tiny Collapsed Sta…
Learn more