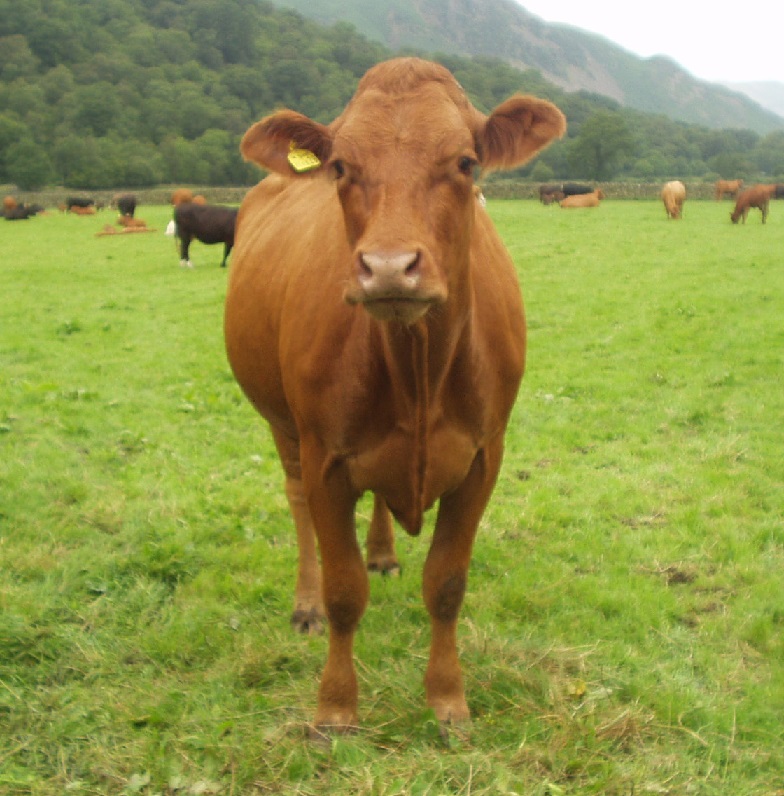 Bovine TB is a respiratory disease where bleeding wounds develop on a cow’s lungs and sometimes udder. These may or may not open, but if they do, the animal will contract a painful cough, perhaps with spots of blood, and struggle to breathe. At this time, the cattle are infectious. If the disease is left to worsen, milk can eventually turn watery and bluish, and bones degrade. Bovine TB affects not only cattle, but also deer, pigs, cats, foxes, rodents and humans – but not sheep. The fact that it can infect humans make the disease zoonotic. Zoonotic diseases are much harder to limit and control than non-zoonotic diseases.

The TB relationship between humans and cows peaked during industrialisation in the Victorian period due to cramped, clustered and unhygienic living conditions. Milk, then unpasteurised, was a big source of infection and lots of people died from drinking it. Soon, tuberculosis testing was introduced and selling infected milk became illegal. If a herd had members in it that tested positive for TB, the whole herd was culled, and by 1958 the disease was thought to have been eradicated, until farmers in Cornwall and Gloucestershire started to report occasional instances. Later studies have speculated[1] that this reintroduction was due to badgers. Acting as a wildlife reservoir for the disease, badgers made contact with cattle – rekindling the spread. From then on, instances increased. Interestingly, TB is probably a human disease in its origin. DNA studies since 1999 suggest that the ancestral bacterium of today’s strand is chromosomally similar to the human form of the disease. The bovine form is most likely to have evolved later.

Vaccination – the good, the bad and the ugly

It is possible to vaccinate cattle to prevent them from getting bovine TB. When 75-94% of the population are vaccinated, we assume herd immunity. Herd immunity protects vulnerable members of the population, such as the very young, very old, or those in whom the vaccine does not take effect. Unfortunately, the Bacillus Calmette–Guérin (BCG) vaccination against TB is not fully effective, protecting only 56-68% of the population, and so isn’t a stand-alone solution[2]. The vaccine is banned under EU Directives anyway, at least for prophylactic use, so it can only be used in an outbreak emergency. The reason for this lies in the overseas meat trade. If vaccinated meat is tested for TB, it comes up positive, even though it is safe. We don’t currently have a way of telling the difference between disease-free vaccinated animals and infected ones. This means importing vaccinated animal products is illegal too. There are currently two kinds of diagnostic test for tuberculosis: IFN (interferon-gamma release assays) and TST (tuberculin skin test). IFN measures immune response to tuberculosis by extracting white blood cells and mixing them in a vial with tuberculosis antigens. White blood cells that have never met TB bacteria before don’t know what to do, but white blood cells that have will give a big immune response. TST works by injecting 0.1 ml of a tuberculin protein derivative into the skin and measuring the height of the raised bump 48-72 hours later. This is also a way of probing immune response. In humans, a raised bump of height of 5 mm or more is a positive test. Not only can these tests not distinguish the immune responses from vaccinated animals from the immune responses of ill animals, but they can also draw a blank testing animals overwhelmed with really advanced disease, animals that have other diseases simultaneously, or very young calves. The IFN test is more sensitive than the TST test, finding 27% more instances of disease. Although researchers are always working on new tests to distinguish diseased and vaccinated animals, the most promising is unlikely to be available for widespread use before 2022 earliest. Badger vaccination is extremely awkward, because the legal vaccine can be administered only via injection. This requires trained experts working over least five consecutive years to cage-trap and inject angry, confused badgers. The current badger vaccination programme being carried out in Pembrokeshire is estimated to cost £673 per badger per year[4]. This is an expensive project given no one’s sure how effective the vaccine is, how well it curbs bTB in cattle, nor what proportion of the badgers it is reaching. Worse, research suggests the vaccine is most effective given to very young badgers... and very young badgers rarely come out of their setts. Still, it’s generally agreed that vaccinating on the perimeters of hotspots contains the disease and so is the best way to go about it.

Transmission, and introduction to badger problem

TB is transmitted through inhalation of infected droplets from the lungs of a diseased animal, or contact with its urine, faeces or unpasteurised milk. However, uncertainty remains surrounding the ways, by which infected and uninfected wild and domestic animals interact and transmit the disease[3]. Although it is evident that badgers as a wildlife reservoir of bovine TB contribute to its spread, the extent of their contribution can’t be quantified. Research suggests cattle movements are crucial to disease movement, but only so long as some local wildlife has contracted TB. Two solutions have been suggested to deal with badgers – vaccinating them and culling them.

Badger culling has been highly criticised as cruel and ineffective. The expertise and dedication required to produce an effective cull is similar to the expense and dedication required for effective vaccination: a lot. Further, culling is often carried out across a wider area. Proactive culling requires around 160,000 trap nights over 4-7 years per 100 km2[4]. Experts remain unable to quantify the extent to which badger culling might provide a long-term solution to bTB control, partly because nobody knows exactly how many badgers there are or how they are distributed[5]. The figures in studies are estimates based on a series of assumptions. These assumptions are (1) that the number trapped is always directly proportional to the whole population (i.e. you always trap 1 in, say, 6 badgers, no matter how much effort you put in); (2) that badger births and natural badger deaths do not fluctuate; (3) that badger immigration and emigration are equal, and that habitats and food availability remain the same year to year[6]. Whilst some of these assumptions are more valid than others, they are always vague enough to provide a big percentage error.

In the most thorough badger cull of 104 km2 across Thornbury in Gloucestershire and Avon between 1975 and 1981, cattle herd incidences of bovine TB dropped to only 15% and 60% in surrounding areas over the next 10 years[8]. Since only badgers were culled and no other animal, and the area and timescale are large enough, these results have been upheld as pivotal statistically meaningful evidence in support of badger culls. However, more recent work suggests that the disease could have dropped off simply because of depleted badger numbers, not because badger-badger, badger-cattle and cattle-badger transmissions were any less likely. In fact, the diseased proportion of remaining badgers could well have increased. This is because disturbed badgers migrate. Although studies on perfectly calm, undisturbed badgers describe them as contractionist, living in groups spread over only 1-2 km[6], it seems evolutionary unwise for badgers not to move on when times get tough, and unhelpful to use normal badger behaviour as an indicator of how they’ll behave under stressful, changing conditions. In fact, badger migration is well-recorded. In the randomised badger culling trial of June 2007 by the Independent Scientific Group on Cattle TB, TB increased just outside proactively culled areas, suggesting that badgers were getting the hell out[4][6]. To minimise this “perturbation effect”, badger culls now use big roads, wide rivers and coastlines as boundaries to culled areas – but there still a small upsurge in TB in the surroundings: a 23% decrease in cattle TB inside the culled area pairs with a 25% increase just outside. Worse, if culling is reactive – a response to outbreak – there is only a 20% increase in cattle TB. As badgers travel and meet new badgers, the rate of TB amongst badgers increases and the disease gets more widely distributed. TB distributions in cattle reflect TB in badgers.

Once the culling ends, new badgers will also migrate into a deserted area to take over the empty setts – so the disease can come straight back. In practice, this takes a number of years and TB counts in the proactively culled areas (which were formerly very high, as hotspots tend to be targeted for such culls) take more than 10 years to recover. On the other hand, high instances in the surrounding area tend to drop back down to normal at a slightly faster rate. This still doesn’t make culling cost effective though. It is both uneconomical and environmentally damaging, costing two or three times as much as the loss of revenue if the disease is left to spread.

Mathematicians have become interested in badger culling because of badger clustering and the perturbation effect. One group tried to use spatial modelling to geographically target culls[5]. This technique works for other cases, such as seeking out water pipes that house cholera, but it doesn’t work for badgers. They simply move too much. And the more you cull, even in one targeted area, the more they move.

There are many alternative strategies for controlling the spread of TB, including medicines, cattle culling, quarantining new cattle, and farm management of cattle movements, feeding and housing. Weirdly, none of these have been carried out alongside badger strategies. One limitation of TB control is the problem of identifying the disease. This means more testing in badgers (currently ~125/5000 are tested) and faster, cheaper diagnoses in cattle. Researchers working in whole genome sequencing have already identified ways to improve the diagnosis by collecting bacterial cells and sequencing them, looking for the characteristic bTB code[7]. This reduces the cost of testing from £517 to £481 per positive case and increases the chance of finding them. Badgers are hard to cull and hard to vaccinate. Both measures are non-economical and time-consuming for badger-handling experts. Culling badgers causes them to break out of their normal social groups, increasing the spread of disease amongst badgers, especially just outside a culled area. Only when badger numbers are significantly depleted does badger culling produce a noticeable effect inside the culled area. Cattle vaccination is currently banned because current diagnostic methods can’t tell the difference between vaccinated and diseased meat.

The Independent Scientific Group on Cattle TB conclude their 2007 report by saying: "First, while badgers are clearly a source of cattle TB, careful evaluation of our own and others’ data indicates that badger culling can make no meaningful contribution to cattle TB control in Britain. Indeed, some policies under consideration are likely to make matters worse rather than better. Second, weaknesses in cattle testing regimes mean that cattle themselves contribute significantly to the persistence and spread of disease in all areas where TB occurs, and in some parts of Britain are likely to be the main source of infection. Scientific findings indicate that the rising incidence of disease can be reversed, and geographical spread contained, by the rigid application of cattle-based control measures alone."

Bovine TB not passed on through direct contact with badgers, research shows
29th June, 2018
New research shows that bovine TB is NOT passed nose to nose between badgers and cattle as was previously supposed, but is transferred via contaminated pasture and dung. This new finding impacts farm practices such as slurry spreading and demonstrates why culling is ineffective. Experts call it a waste of time and money, because bacteria spread in faeces can survive long periods of time and resurface during spreading.
Read more